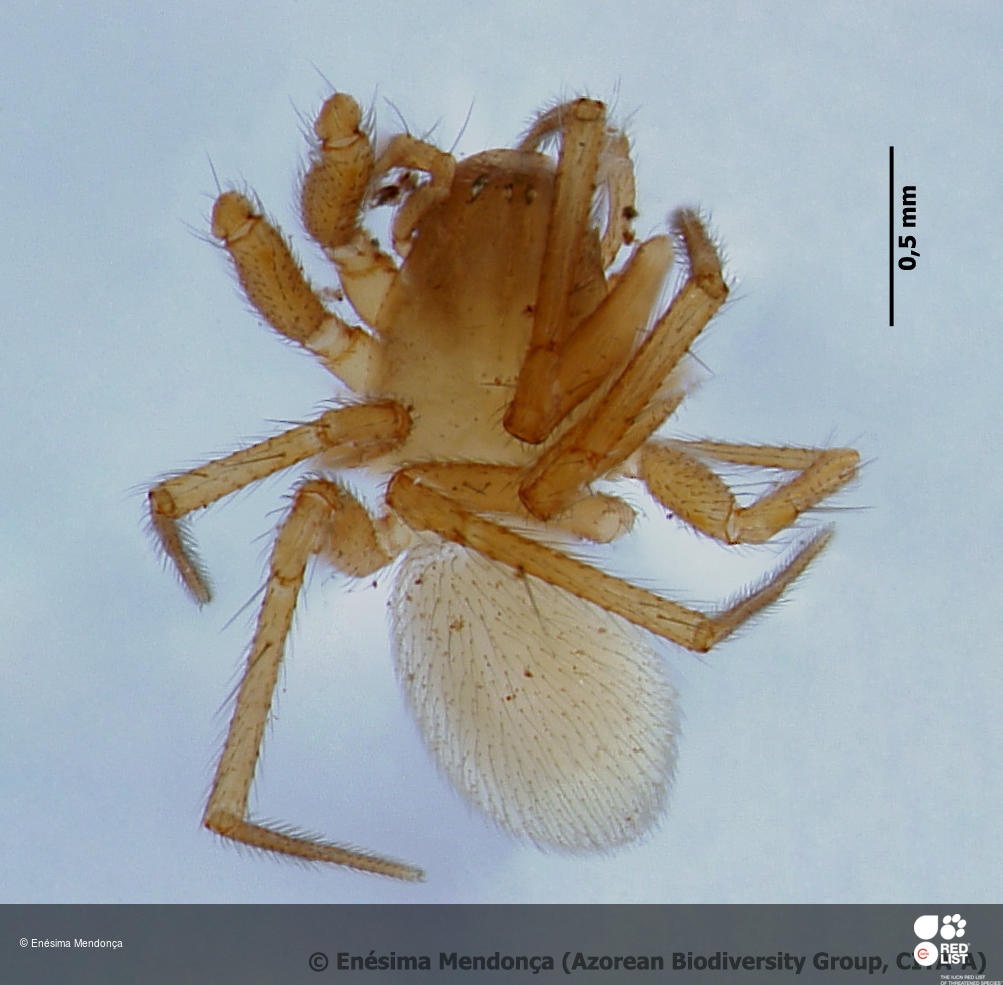 Porrhomma borgesi is an endemic money spider species occurring on three islands of the Azorean archipelago: Pico, Terceira and S. Miguel (Azores, Portugal) (Borges et al. 2010). It has a small Extent of Occurrence (EOO = ca. 8,312-8,500 km²) and a very small area of occupancy (AOO = 72-124 km²). The species is only abundant in very pristine sites (e.g. sites with a high habitat quality index sensu Gaspar et al. 2011) and is rare in most sites. Currently, invasive plants (Hedychium gardnerianum and Pittosporum undulatum) are impacting some of the areas and decreasing the quality of the habitat. Based on Ferreira et al. (2016) the habitat will further decline as a consequence of climate change. Therefore, we suggest as future measures of conservation: (1) regular monitoring of the species; and (2) control of invasive species namely Hedychium gardnerianum. Based upon the inferred decline in AOO, the decline in the quality and structure of habitat in some islands and number of locations the species is assessed as Vulnerable (VU).

The species is only abundant in very pristine sites (e.g. sites with a high habitat quality index sensu Gaspar et al. 2011) and rare in most sites. Despite the fact that Porrhomma borgesi has recorded between 352 and 1,051 m in elevation, the species is particularly abundant only between 700 and 1,051 m. Many of the known sites are currently being invaded by invasive plants (e.g. Hedychium gardnerianum, Pittosporum undulatum); and a continuing decline in the number of mature individuals is estimated from monitoring schemes (Borges et al. 2016) and from the ongoing habitat degradation.

Despite the fact that this species was recorded between 352 and 1,051 m elevation, Porrhomma borgesi is particularly abundant only between 700 and 1,051 m in very pristine sites (see Gaspar et al. 2011). This species builds its typical sheet-webs at ground level, usually using small holes in places with high humidity in dense forest.

(Triantis et al. 2010). Currently, the rapid advance and expansion of invasive plants species is the major threat, particularly Hedychium gardnerianum but also Pittosporum undulatum, which are changing the structure of the forest and the cover of bryophytes and ferns in the soil, which impacts the species' habitat quality. Based on Ferreira et al. (2016) the habitat will further decline as a consequence of climate change (increasing number of droughts, and habitat shifting and alteration).

The species is not protected by regional law, but its habitat is in regionally protected areas (Natural Parks of Pico, Terceira and S. Miguel). Degraded areas, degraded due to invasive plant species, should be restored and a strategy needs to be developed to address the current threat posed by invasive species as well as the future threat of climate change. Formal education and awareness are needed to allow future investments in restored habitats invaded by invasive plants; while further research is needed into its ecology and life history in order to find additional specimens in other areas of native or exotic forest and to obtain adequate information on population size, distribution and trends. An area-based management plan is also necessary for the most disturbed sites including invertebrate monitoring to contribute to a potential species recovery plan. Monitoring every ten years using the BALA protocol will inform about habitat quality (see e.g. Gaspar et al. 2011).