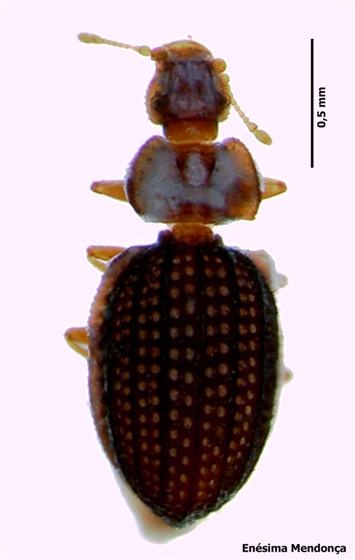 Metophthalmus occidentalis is an endemic species present in Faial, Graciosa, S. Miguel and Sta. Maria islands (Azores, Portugal). It has a large extent of occurrence (EOO = ca 23,000  km²) and a relatively small area of occupancy (AOO = 48 km²). The species is common and  known from at least seven fragmented subpopulations in four islands. In the past, the species has probably strongly declined due to changes in habitat size and quality. The main threat is the advance of the invasive plant Hedychium gardnerianum that is changing the habitat. Based on Ferreira et al. (2016) the habitat will further decline as a consequence of climate change (increasing number of droughts). Based upon the small area of occupancy this species is assessed as Endangered.

Metophthalmus occidentalis is an endemic species present in Faial, Graciosa, S. Miguel and Sta. Maria islands (Azores, Portugal) (Borges et al. 2010), known from Natural Forest Reserve of  Pico Alto (Sta. Maria) and present also in some exotic plantations in the other islands. The extent of occurrence (EOO) is ca 23,000 km² and the maximum estimated area of occupancy (AOO) is 48 km².

M. occidentalis is a widespread and particularly abundant species in native and exotic forests. A decline in the population abundance is inferred as a consequence of the spread invasive plant species and exotic forest cut. This species has been assessed here as severely fragmented as at least 50% of its population can be found in subpopulations that are 1) smaller than would be required to support a viable population, and 2) separated from other habitat patches by a large distance. In fact, the species occurs in fragments that are isolated in a matrix of pastures.

This species occurs in native forests, exotic forests (dominated by Pittosporum undulatum) and Cryptomeria japonica plantations in several Azorean islands (Faial, Graciosa, S. Miguel and Sta. Maria islands), with an altitudinal range between 100 and 500 m. This species is a decomposer of organic matter living in the soil. Based on seasonal data from SLAM traps obtained in several islands between 2012 and 2016, the adults are active all year, being most abundant in spring and summer (Borges et al. 2017).

In the past, the species has probably strongly declined due to changes in its habitat size and quality (Triantis et al., 2010). The main threats are the advance of the invasive plant Hedychium gardnerianum that is changing the habitat and the management of exotic patches of forest in which some subpopulations are still persisting. Based on Ferreira et al. (2016) the habitat will further decline as a consequence of climate change (increasing number of droughts and habitat shifting & alteration).

The species is not protected by regional law. Its habitat is in a regionally protected areas (Natural Parks of S. Miguel and Santa Maria). Degraded habitats should be restored and a strategy needs to be developed to address the future threat by climate change. Further research is needed into its ecology and life history in order to find extant specimens in historical sites and in additional low elevation sites and obtain information on population size, distribution and trends. It is also necessary to create a monitoring plan for the invertebrate community in the habitat in order to contribute to perform a species potential recovery plan. A monitoring every ten years using the BALA protocol will inform about habitat quality (see e.g. Gaspar et al. 2011).